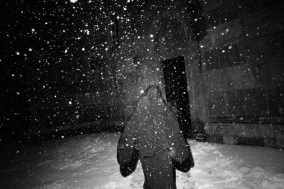 Exactly one year ago, I entered Serbia on my indirect route to Kosova. I had flown from Budapest on the now defunct Malev Airlines and arrived in Belgrade with considerable trepidation (and without luggage). Most of my knowledge of Serbia and its people had been shaped by the American media, which largely had stereotyped and vilified the Serbs for their association with Milošević.

On my first full day, I took a three-hour foot tour of the capital city hosted by an amiable graduate student, who began by saying, “I want you first to know that Serbians are not evil people.” She then explained the breakup of Yugoslavia and the subsequent conflicts—all from her childhood memories, which included vivid accounts of standing on the city’s bridges to “protect” them during the bombings. Without assigning culpability, she acknowledged that terrible things had happened before, during, and after the war(s) and many innocent people had suffered greatly and needlessly. All she wanted now was for everyone to live peacefully.

Last night, while reading the news on CNN’s website, I saw a link for a recent photo report on the monks of Dečani, a Serbian Orthodox monastery near the border with Montenegro. After reading the comments, I felt compelled to add my own. (Note that I have employed Latinized Serbian spellings to harmonize with the photo report.)

I lived in Kosovo for six months last year as a US Fulbright Scholar and was fortunate to visit the beautiful monasteries and churches at Peć, Gračanica, and Dečani. During my six months, I came to know ethnic Serbs and ethnic Albanians in this region: all had been affected by the war and subsequent upheavals, yet rarely if ever did they say anything disparaging about each other. As an American, I was treated as well in Belgrade as I was as a Christian living in my Muslim neighborhood in Pristina. What I learned during my six months is that people are people: we want to be healthy and happy and enjoy our family and friends. Unfortunately, there are, have been, and always will be those who exploit religion and politics to their own gain by fostering intolerance and turning one people against another. As Mr. Cocco has discovered and shared in his exquisite photographs, there is a natural and peaceful beauty that lives in Dečani and its monks; indeed, it lives everywhere and in each and everyone of us…if we look for and welcome it.